Week 32--In the City--Shopping in Oakland 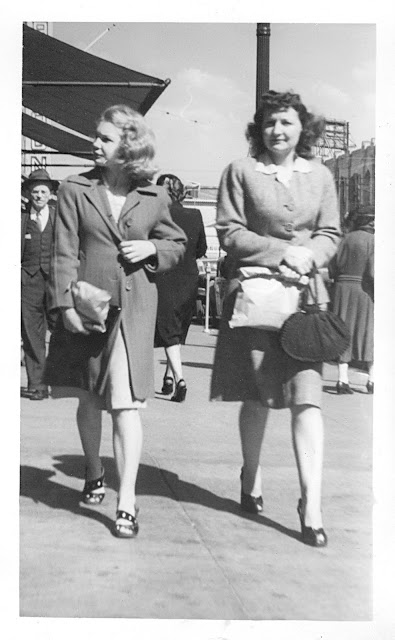 My mother lived with her parents in the 1940s and 1950s in Walnut Creek, California until she was a junior in high school, and then they moved to a house they purchased in Pleasant Hill. Both communities were rural or small-town in nature. There were local shops to purchase goods but no large department stores. Perhaps Sears or JC Penney had catalog stores where one could order something.  So if you wanted to do shopping in larger department stores, you had to drive or ride the bus into Oakland or San Francisco. Oakland had an H.C. Capwell and a Sears Roebuck store, plus many other fine shops along Broadway and Telegraph. It is likely that my mother and her mother traveled into Oakland on the Greyhound bus and shopped in the stores. It would have been a big deal, one where you put on your best clothes because you were going into the city. How do I know this? We have in our collection a photograph of my mother and grandmother walking down Broadway near the Paramount Theater. From the an
3 comments
Read more

Favorite Name – When Hazel was a Man’s Name 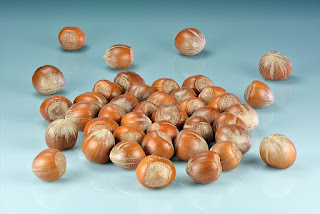 I currently have four people in my genealogy database named Hazel Loveless. Three are men, all born before 1820, and one is a woman, born in 1914. I wonder about the popularity of the name in the 1700s. I decided to search the 1800 U.S. census on just the first name of Hazel. I got sixteen hits, with half having spelling variations. My ancestor’s brother, Hazel Loveless, b. about 1770, turned up in Newberry District, South Carolina.  Others were found in New York, Vermont, Maryland, Connecticut, North Carolina, and New Hampshire. I thought it was a southern thing to name boys Hazel. Census Year No. with Hazel as First Name 1810 26 1820 33 1830 66* [1] 1840 84* My Hazels Hazel Loveless was born about 1770. He was an older brother of my maternal 4x-great-grandfather, James Loveless, who was born about 1771. Both may have been born in North Carolina or South Carolina, but I
2 comments
Read more

Week 29: Fashion – Mam-ma and Aunt Bev Pose for the Camera 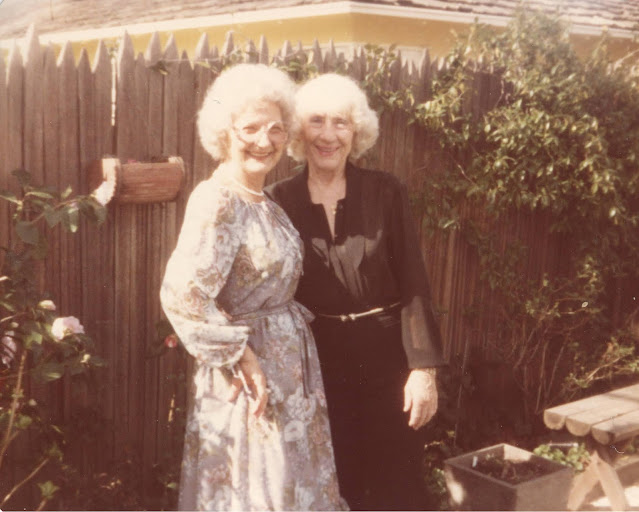 I come from a line of women who loved clothes and loved posing in them. Previously, I shared some photos of my great-aunt, Beryl Johnston and you can find that post here . There are many more shots similar to those that I will share here. My grandmother, Pansy Louise Lancaster Johnston, also liked posing for photos in her favorite outfits, some she made. Pansy "Johnnie" Johnston & Beryl Johnston Russell Posing in Johnnie's backyard Pansy showing off her new dress she made My aunt loved posing for the camera in her home and I have boxes of slides of her in different outfits such as these two. I think Hollywood influenced her poses. My grandmother and my great aunt were not related, but got along well. Beryl was my grandfather's sister. She lived in Sacramento and came often to our holiday get-togethers. Such fun seeing all of these photos and appreciating the change in fashion over the years. This is my fourth year working on this year-long 52 Ancestors in 52 Wee
2 comments
Read more 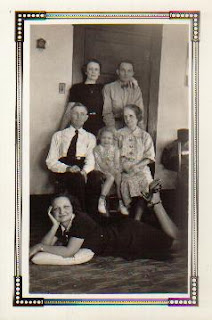 Martha lost her mother when she was just three years old in 1872. Besides her, she had four siblings under ten: John E, Mary E, James R, and Daniel K., who was just eighteen months old. It is likely that her older sisters, Sarah “Sallie” Coor and Irma Anna Coor, took care of the younger children. Her father, James Madison Coor, was a farmer. By 1881, he moved from rural Copiah County, Mississippi to rural Erath County, Texas. All eight of his children who lived to adult moved to Texas, too. He died in 1889, leaving two children needing a guardian, which was done by their uncle, Samuel O Durham, husband of their sister, Irma Anna. S.O. Durham reported annually to the court in his capacity as guardian for DK and Doll Coor. In December 1894, he reported that Doll Coor married Cary Lancaster on 9 March 1892 and that she sold her entire interest in the Coor Estate to A.A. Chapman. [1] Her husband’s full name was William Carlton Lancaster, son of George W. Lancaster and Martha J. Polly
2 comments
Read more

For many years, I did not know what had become of my 2x-great-grandmother, Martha Jane Polly who married George W. Lancaster. She was with their family in the 1880 census and then gone. Also gone were their two children, Lonnie and Margaret. I assumed she had died and searched for clues to her death and burial, but never found any records. I couldn’t find any records of the two lost children either. Then I received an email from a descendant of one of George and Martha’s children. There had been a divorce and a remarriage, and Martha died in Tulare County, California in 1932. [1] Life Before the Divorce George W. Lancaster married Martha Jane Polly on 25 Oct 1871 in Kaufman County, Texas. [2] Twenty-two years and six children later, they were divorced on 23 December 1893 in Pima County, Arizona Territory. [3] They had six children, all born in Texas, except Reginald, who was born in Phoenix, Arizona Territory: William Carlton, born 21 July 1873, Rockwall Co, Texas [4] Lonnie O
2 comments
Read more

Week 21: At the Cemetery – Some Erath County Cemeteries

When I began researching my Mam-ma’s family, I wanted to go to Texas to see where my mother and grandmother grew up. I broached the subject to my grandmother and she agreed to go on a trip to Stephenville with me. The year was 1995. My mother had been gone three years already and I had been working on genealogy research for probably two years. As I worked on Texas research, I really wanted to visit the places my mother lived. Mam-ma was willing, especially as I paid our way, and she made the arrangements for the places we would stay: the homes of her niece, Sandra, and her brother, R.D. My great-uncle, R.D. was great. He took us all around Stephenville, stopping at each of the houses where they lived. It seemed they moved a lot, looking for better or cheaper places to live. Some were in town and some out in the country. When my grandmother was born, her father was still trying to farm. But it didn’t work out and he learned to fix cars instead, which had a steady income. I kept no
Post a Comment
Read more

Week 20: Cousin Bait – Why I Write This Blog 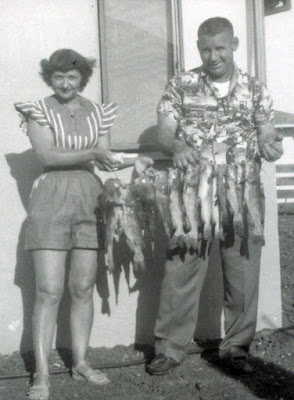 I began this blog in 2011 to honor the southern roots of my grandmother, Pansy Louise Lancaster, and have a place to tell the stories of her family. Another motivation for writing blog posts is hoping that cousins will find my posts and contact me. This has happened several times, but not as much as I had hoped. I heard from a Hutson cousin and he has done tremendous research, taking the family back many generations. He formed a Hutson Family Facebook page where other members of his immediate family have also joined and shared photos. He is related to me through my 4x-great-grandfather, Robert Hutson (1821-????). I also heard from Loveless cousins, some of whom live in Texas and others in Arkansas. These are descendants of Ebenezer Loveless (1851-1929). I have been contacted by some Lancaster cousins, who are descendants of George W Lancaster (1839-1919). One descendant helped me discover what had happened to his wife, Martha Jane Polly (1855-1932), who I had thought died. This
Post a Comment
Read more
More posts